In a recent blog post I redrew the imaginary lines that make up the 50 states. This exercise created a buzz of discussion (8 comments is a lot for this blog) and brought out some state pride and disagreement from the readers. I would like the readership to know that I’m prepared to stand behind, on top of, or in the map I redrew with a few adjustments based on the received feedback.

Although this post will not be entirely about new borders. If you stay tuned long enough, I promise to get to an idea that will prove to be less controversial, yet will stoke statewide passions to levels seldom seen since the Civil War.

ASIDE #1: Adjustments will include: Delaware taking over the entire Delmarva Peninsula (thanks for this suggestion Nate) and South Dakota taking over Pima County, AZ, thus doubling the size of North Dakota (thanks for the tip, Der Struwwelpeter). If you are interested in reading further about the movement for a new state called Baja Arizona, read this article.

ASIDE #2: While I think the Arizona “separatists” will have a hard time in their quest for statehood, it would be fun to witness the creation of new state. Since I was wasn’t alive when West Virginia left Virginia, it would be really neat to watch this process unfold. This begs the question: Will you remember where you were when Baja Arizona became a state and the U.S. flag had to be changed to some weird pattern with an extremely odd number of stars?

Get on with it already….

Here’s my idea. What if there was a bi-annual athletic competition between the states? I don’t mean college sports. I mean taking the best amateur or professional athletes born or raised in a state (the state you lived in the most up until 18) and having them compete against athletes from another state. Much like the Olympics or World Cup.

To discover why I’d like to see this competition we need to take a look at the state of Wisconsin as an example. When the Packers won the Super Bowl this year, the citizens of Wisconsin were walking around with a lot of pride, as they should, they won the highest prize in professional football. However, it doesn’t mean they are a better state at sports. Why? Because Aaron Rodgers is from California.

According to playersfrom.com, Wisconsin born Charlie Whitehurst is the state’s only active NFL QB. I don’t think Whitehurst’s Wisconsin team could beat Kyle Orton led Iowa. However, I’d like to see it. I think the ratings would be huge.

Okay so what sport is this competition in?

The previous example clearly is a football example, but it doesn’t have to be football. Let’s look at our options. To create the most interest the sport needs to be American, popular, played in every state, and have the best chance for balanced competition. I have gone ahead and ruled our choices down to three based on this criteria: football, basketball, and baseball.

Let’s look at the merits of each to help us make a decision. Football: is the most popular, yet the competition wouldn’t be as good. Right now most NFL & top college players come from Florida, California, Texas, and Ohio. Football also doesn’t suit itself as well to underdogs. Meaning, Nevada would never beat California, and it would never be fun to watch. This tournament would do well with viable underdogs.

Baseball’s popularity is sagging and the warm weather states have a big advantage. It also doesn’t fair well monetarily outside of MLB.

That’s why I’m deciding on basketball. It’s indoors, played in all states, and will allow for the underdog to sneak up. I’m not going to sleep on Iowa’s Heinrich, Collision, and Korver or Alaska’s Boozer, Chalmers, and Trajan Langdon (still going strong in Europe). But I like even better the thoughts of Rose, Wade, Marion, Igodala, and Brian Cardinal teaming up for Illinois. Finally, Wade has the supporting cast to win a championship!

How this Competition will Work

The idea is that this tournament could be played in the summer during the odd number years (so it doesn’t coincide with the FIBA World Championships or Olympics). The competition would start with a regional pool play competition (so you play your neighbors), with the top two teams from each region advancing to the national playoffs until a champion is crowned. Much like the format of the World Cup.

Ideally, a 16 team knock phase works best. Therefore we need to divide the 50 states into eight regional groups. Yes some regions seem tougher than others, but the point is to see who is the best state amongst neighbors. I have divided these for you.

So in each group, each state plays the other states in their region once. This stage would take two weeks (with a game every other day) at a site within each region (reducing travel). The knock-out rounds will occur over the third and fourth weeks of the competition. This is how the final bracket will be set up: 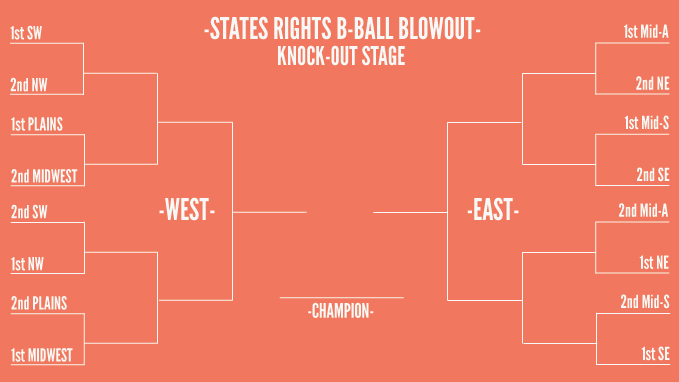 I believe this yet to be named competition (maybe States Rights B-Ball Blowout?) would be fun. I even think it has a market to make some serious news and money. Also, please think of how comically and irrationally the fans will take this competition. If an Alabama fan would poison the trees on in-state’s Auburn’s campus, just think of the extreme measure they would take against Florida, Georgia, or Mississippi! (I'm not to promoting vandalism or violence between fans. This is actually quite sad.)