Every year NFL games seem to get longer and longer. Most take three to three and a half real hours to play 60 minutes of actual game. So lets pick up the pace a bit by setting a goal to have games played in a 2.5 hour window. Here’s how: 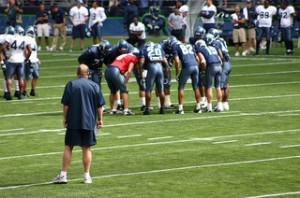 #1: Ban the huddle… …unless coming out of a timeout or at the beginning of a drive. These are professional athletes, they don’t need to huddle after every play. There are already teams with really good offenses doing this (NE, Denver, Philly to name three). It’s time to have all teams do this.

#2: Shorten the play clock to 28 seconds. With the huddle banned this is a natural. The Chip Kelly Eagles are snapping every 20 seconds (and want to go faster) and the Pats every 22-24. Is the league worse off for this? I say no. They’ve doubled the number of offense snaps per game. More bang for the ever increasing buck!

*One of the intended benefits of faster play is that teams would no longer be able to field 400 pounders because they won’t be able to keep up. Simply put, the players will be healthier for the extra running, and this may actually help to promote a healthier lifestyle for Americans.

#3: If a team goes 3 and out, a commercial break should not be taken. If your offense sucks, fans shouldn’t have to suffer from sitting through the tenth repeat of a Buffalo Wild Wings commercial in the first quarter of a game. Therefore, I recommend the following changes: two commercial breaks per quarter, one in between each quarter and two at halftime. That is 12 breaks (10 more than a soccer match) and should still be enough to only see that B-dub’s commercial six times. 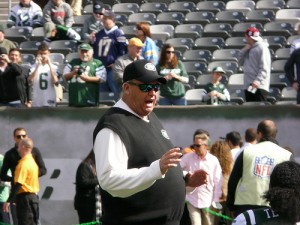 Ban coach to QB electronic devices. In no other sport do coaches influence the game more than in football. This is fine if your team has a good coach, but there are way too many who are egomaniacal micromanagers who can’t give up control*. Let’s let the players play. NFL QBs should be able to call the plays for the team. I’m not saying coaches can’t call plays, but lets make it more difficult.

And one more thought:

This week, Big 10 Commissioner Jim Delaney came out and offered his full support to the ideals of amateurism by exclaiming that he doesn’t feel the NCAA should be the minor leagues for the NFL and NBA. He said if a player wants to go pro let them, just like the way it is in baseball and golf. You know what, he’s right.

If you are a loyal reader of mine, you know I’ve long been advocating for a professional model towards sports in America, so I was pleased to hear his candor. He seems to be admitting that any which way the NCAA tries to semi-professionalize, it will not work and will look like a joke (because the NCAA is a joke).

How do you feel about the proposed rule changes? Chime in by commenting below.