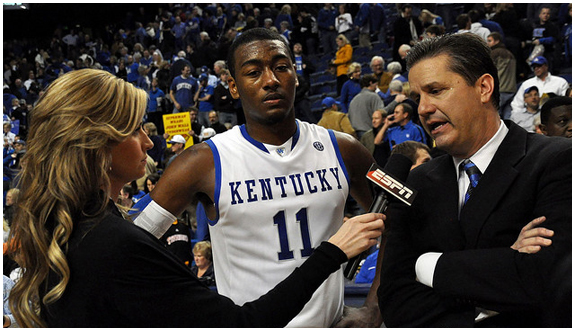 Recently, I read an article on ESPN.com about how the recruiting process is ruining college basketball. To me, it wasn’t the fact that some coaches break the rules to recruit kids, its that most of them cheat to recruit players. This is just one of the new revelations that is destroying amateur basketball.

The symptom is a me first attitude in American basketball, and its easy to see why. If you show promise at an young age, you join an AAU travel team and parade in front of scouts and coaches. You have to show off your talents to make an impression and to separate yourself from the pack you have to show off your skills. Meaning that if you are a team player, a scholarship will be harder to come by. I base this off the fact that college coaches need impact players in order to save their own job.

So lets say you flashed enough skill and went off to college. In your Freshman year you do well and start to hear whispers from those around you about millions of dollars in the NBA. You may not be ready, but you jump at the chance. After all, you would blame you for taking millions of dollars. You get drafted. You get your millions. And then your AAU coach calls and wants some of the millions.

This couldn’t be a further contrast form what I have been seeing in the ongoing World Basketball Championships. I can’t help but notice that some of these countries are producing incredible talent, and most of that talent isn’t playing college ball in States. Talent that is being molded by professional clubs teams. This means young players are getting proper teaching and competition beginning in middle school all for a shot to make the local 12.

The Worlds are fun to watch. It’s like watching a free flowing college game, but with professional athletes. Players move without the ball, and share the ball, yet they still show flashes of athleticism in fast breaks. There isn’t room for me first players.

Let’s look at a player like Ricky Rubio. He began his career in the youth systems of Spain and eventually broke into the top team at his local club at the age of 15. He is a rarity in that he reached that level so quickly, but from 15-18 he kept improving and played solidly in the professional league. He was able to play against top talent (sometimes twice his age), hone his skills, at relatively low pressure. He was then drafted in the NBA, but chose to move on to Barcelona, where he stars for the European Champions and the Spanish National Team.

The key to this is that he’s been a professional since 15. He’s hasn’t had to worry about who he can talk to. He doesn’t need to have Euros slipped to him through back door channels. He just signs with an agent and a club and plays ball. And his first contract is modest. It helped to learn to manage his finances and start to make wise decisions at a younger age. Proving that he could handle life as a professional, he got a bigger contract with the team in Barcelona. And the best part is Rubio can now pick the time he wants to move to the NBA, when he feels he is not being thrown to the wolves (or Wolves).

If there was an American Rubio-like player, he would have just finished his only season for John Calipari, made a deep run into NCAA tourney and then turned pro. Really, all he would have proved in college is that he didn’t need to be there. Is there anything he can learn from a snake like Calipari in one year?

If you haven’t figured it out by now the player I am referring to is this year’s #1 pick, John Wall. One and dones have provided nothing to the college game, since the age limit rule went into effect, except for some quick paychecks to schools, overhype from ESPN, and tainted NCAA tournament runs.

When I was 16, I went on a People to People Sports Ambassador tour of New Zealand and Australia. I was amazed at the differences in how talent was developed as opposed to in America. Their teams consisted of the some of the best players in the country for their age, and they were good. They were being groomed for team success and not individual success.

Specifically, Australia had a sports academy called the Australian Institute of Sport. It is a similar concept to the US Olympic Training Center in Colorado Springs, except it allows the top youth athletes in all sports and not just the niche Olympic sports, to go to school and learn their sport properly. They have produced among others, Andrew Bogut, a top NBA pick and current Milwaukee Buck.

This is a much different concept than the experience in the U.S. America is really the only country where public academic institutions put a large emphasis on after-school athletics. Other countries have P.E. class, but generally don’t offer after school athletic teams. That is the job of independent clubs.

Also consider that schools in the U.S. are currently strapped for money, and its not just public universities, its also the public school districts. Therefore, there has been a rise in charter schools. Most charter schools do not have athletic programs. I find it hard that the public school systems can financially continue to offer sports programs in the same capacity they do now. With the way the arts are being cut, it only a matter of time before sports follow suit.

Another consideration is that schools don’t always provide the right avenue for developing players and only account for small percentage of the actual time a kid will spend playing the sport.

When I was in high school, I typically played in roughly 60 basketball games a year, however only 20 or so of them were with the school team. The other 40 were with the Dubuque Dominators, a travel team loosely affiliated with my school team but independent of it. We went the untypical route of using only players from our school, however it was more typical we ran into regionally based AAU teams. More of those players seemed to show more loyalty to their AAU program than their schools. Sometimes the school got in the way of the development of a player with the political games that are too often played in a school system.

While schools aren’t always the best developers of talent, AAU teams can do more damage. The AAU is based on individual talent and not team play. Rarely will you see an AAU team practice hard between games. Sometimes its just show up and play. This means players rarely get the proper teaching they need to succeed at higher levels. It may sound like I’m contradicting myself saying schools don’t play enough games, and AAU teams don’t practice enough, but there’s a middle road that can be achieved.