A few hours after the explosions at the Boston Marathon, the President took to the podium to say roughly: we will find out who did it and why and they will be held accountable. We knew exactly what he meant. The perpetrator(s) will meet a violent end. The American public will expect nothing less.

We live in a cycle of violence. For every murder, mass shooting, and detonated device in an urban center, there is an expected violent reaction. They go by different names: the death penalty, raids, strategic bombing campaigns, and drone strikes. Violence has been used as the number one tactic to stop violence.

Regardless of where one falls on political spectrum in America, violence, or the threat of violence, is what defines our nation to the world. To many Americans, violence earned our freedom on the battlefield (and protects us still today). Even the threat of violence protects us from the tyranny within our borders, as it is written into our rights that we may ‘bear arms’.  The U.S. is the only nation on Earth that has used a nuclear weapon in battle, and we used it twice. And we continue to hold onto ours to prevent others from using theirs.

However, it seems utterly hopeless to think that the cycle of violence in America can change. I think this is why many Americans hold onto their guns. They have no other answer.

Let’s look to Scripture for Answers

I don’t want this to sound like America is solely responsible for terrorism, both domestic and abroad.  But its clear the cycle of violence needs to stop. And America can lead the way.

Fortunately, Scripture is full of examples for ending the cycle of violence. In Romans 12, Paul outlines what living like a Christian looks like. Remember that when Paul wrote to the church in Rome, they lived under one of the most ruthless governments ever, and as Christians, they were attacked and put to death by their own government. Their enemies were more powerful than they and could get away oppressing them. And still, Paul offers these words:

Do not repay anyone evil for evil. Be careful to do what is right in the eyes of everyone. 18 If it is possible, as far as it depends on you, live at peace with everyone. 19 Do not take revenge, my dear friends, but leave room for God’s wrath, for it is written: “It is mine to avenge; I will repay,”[d] says the Lord. 20 On the contrary:

“If your enemy is hungry, feed him;

if he is thirsty, give him something to drink.

In doing this, you will heap burning coals on his head.”[e]

21 Do not be overcome by evil, but overcome evil with good.

How to Break the Cycle of Violence

At the risk of not sounding too cynical, America has done some good in the world.  She has brought the idea of a self governing people to the world. She kept Europe from starving after WWII and helped build Japan, her old enemy, into an economic powerhouse. She is currently helping to stem the tide of diseases like Malaria and AIDS in Africa. But it hasn’t been enough to change our violent reputation. America, to be known only by the good, needs to become non-violent.

Is it surprising that terrorists have their strongest holds in countries and places that are in severe poverty? Is it surprising that the most violent sections of our cities are also the poorest? America has the wealth and capability to eradicate poverty in the world, and we don’t need to invade a single country to do so.  Literally, we can provide all our enemies a drink by building clean water wells for every last person on Earth. It would be a start.

Is it surprising then that Jesus teaches us to help the poor more than anything else?

Did Jesus Promise us Personal Safety?

In following Jesus, you were never promised your personal safety. In fact, He demonstrated through His life and death that those that follow Him will have enemies. Despite these enemies, we don’t have an account of Jesus ever carrying a weapon. However, we do have an account of one of his disciples carrying a weapon. So let’s see how this turned out:

When the Romans came to arrest Jesus, Simon Peter drew his sword and cut the ear off of the high priest’s slave (John 18).  Which in turn gave Jesus a window to make an escape out of the garden (Hollywood 101).

I suppose that is what one would expect to happen, but Jesus doesn’t play by the rules of the cycle of violence. What He did is countercultural. Jesus admonished Simon Peter, put the ear back, and proceeded to be arrested so that through His death the cycle of violence could be broken.

Can someone be Pro-God, Pro-Life, and Pro-Gun? 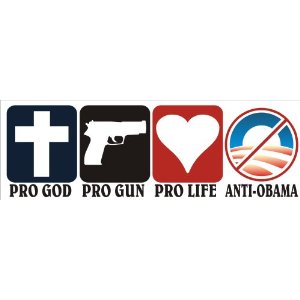 The other night I was refueling my vehicle, and I saw a bumper sticker that looked like the one to the left:

Here is my question, can one be Pro-God, Pro-Life, and Pro-Gun? Can you value life and guns? Are there guns in Heaven?

Guns are an instrument of fear. There is no fear in Heaven. Therefore, there will be no guns in Heaven. Jesus prayed that Heaven will be brought to Earth. Therefore help bring Heaven to Earth. Get rid of your gun.

The central argument of the pro-life movement is that life begins at conception and that in turn abortion is murder by a different name. So if you ascribe to pro-life philosophy, then it would be hypocritical to suggest that a life can be taken after birth as well. Regardless of what that life may have done.

To be absolutely clear, never am I suggesting that a murderer should be able to walk free. Just that when they are captured they are treated humanely and given a fair trial. To treat them fairly is to treat them in a way their victims weren’t treated. Repaying evil with good.

Life long sentences, or multiple life long sentences, should be complete with rehabilitation efforts. Why? Because as a Christian I believe in life and that every life can be redeemed. Many of these terrorists believe that through death they will get the rewards of their heaven. So instead of giving them the self-righteous death they want, let’s give them life.

We can not continue to be surprised at every bloody Chicago summer evening, Boston Explosion, Newtown Massacre,  Batman shooting, 9/11, or Columbine. Our hearts can pain and we can weep for there is evil in this world, and we know it.